The NEH-funded Linked Ancient World Data Institute, still in progress at ISAW, has got me thinking about a number of things. One of them is bibliography and linked data. Here's a brain dump, intended to spark conversation and collaboration.

Bibliographic and citation collection and management are integral to every research and publication in project in ancient studies. We could save each other a lot of time, and get more substantive work done in the field, if it was simpler and easier to do. We could more easily and effectively tie together disparate work published on the web (and appearing on the web through retrospective digitization) if we had a common infrastructure and shared point of reference. There's already a lot of digital data in various hands that could support such an effort, but a good chunk of it is not out where anybody with good will and talent can get at it to improve it, build tools around it, etc.

First of all, I'm talking to myself, my collaborators, and my team-mates at ISAW. I intend to eat my own dogfood.

Here are other institutions and entities I know about who have potentially useful data.

This morning I added the RSS feed for "Ancient World Mapping Center Notes" (via Facebook) to the Maia Atlantis Feed Aggregator.

You'll find context in yesterday's post on the dissertation.

It turns out it wasn't as hard as I anticipated to start getting useful information extracted from my born-digital-for-printing-on-dead-trees dissertation. Here's a not-yet-perfect xml serialization (borrowing tags from the TEI) of "instance" information found in the diss narrative:

Each instance is a historical event (or in some cases event series) relating to boundary demarcation or dispute within the empire. Here's a comparison between the original formatting for paper and the xml. 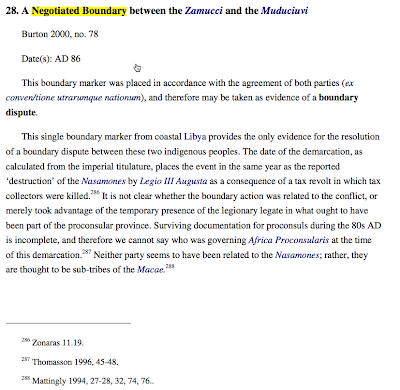 
One thing that made this a lot easier than it might of been was the way I used styles in Microsoft Word back when I created the original version of the document. Rather than just painting formatting onto my text for headings, paragraphs, strings of characters, and so forth, I created a custom "style" for each type of thing I wanted to paint (e.g., an "instance heading" or a "personal name"). I associated the desired visual formatting with each of these, but the names themselves (since the captured semantic distinctions that I was interested in) provided hooks today for writing this stuff out as sort-of TEI XML.

There's more to do, obviously, but this was a satisfying first step.

Probably not even that long:

Information about (and code) for the Ancient World Linked Data JavaScript library.

I've been sitting on the dissertation way too long. So here it is, unleashed upon the world under the terms of a Creative Commons Attribution Share-alike license.

I have visions of hacking it up into a super-cool, linked data, ever-updated information resource, but there's no reason -- even though it's pretty niche in a lot of ways -- why anyone who might benefit from having, using, or critiquing it meantime should have to wait for that to happen.

Comments, questions, and post-release reviews are welcome via comment here, or via email to tom.elliott@nyu.edu, or on your own blog. And feel free to fork the repos and play around if you're mob-epigraphically inclined.

I fear and hope that this post will cause someone smarter than me to pipe up and say UR DOIN IT WRONG ITZ EZ LYK DIS ...

Here's the use case:

The Integrating Digital Papyrology project (and friends) have a Zotero group library populated with 1,445 bibliographic records that were developed on the basis of an old, built-by-hand Checklist of Editions of Greek and Latin Papyri (etc.). A lot of checking and improving was done to the data in Zotero.

Separately, there's now a much larger pile of bibliographic records related to papyrology that were collected (on different criteria) by the Bibliographie Papyrologique project. They have been machine-converted (into TEI document fragments) from a sui generis Filemaker Pro database and are now hosted via papyri.info (the raw data is on github).

There is considerable overlap between these two datasets, but also signifcant divergeance. We want to merge "matching" records in a carefully supervised way, making sure not to lose any of the extra goodness that BP adds to the data but taking full advantage of the corrections and improvements that were done to the Checklist data.

We started by doing an export-to-RDF of the Zotero data and, as a first step, that was banged up (programmatically) against the TEI data on the basis of titles. Probable matches were hand-checked and a resulting pairing of papyri.info bibliographic ID numbers against Zotero short titles was produced. You can see the resulting XML here.

I should point out that almost everything up to here including the creation and improvement of the data, as well as anything below regarding the bibliography in papyri.info, is the work of others. Those others include Gabriel Bodard, Hugh Cayless, James Cowey, Carmen Lantz, Adam Prins, Josh Sosin, and Jen Thum. And the BP team. And probably others I'm forgetting at the moment or who have labored out of my sight. I erect this shambles of a lean-to on the shoulders of giants.

To guide the work of our bibliographic researchers in analyzing the matched records, I wanted to create an HTML file that looks like this:
In that list, I wanted items to the left to be linked to the online view of the Zotero record at zotero.org and items on the right linked to the online view of the TEI record at papyri.info. The XML data we got from the initial match process provided the papyri.info bibliographic ID numbers, from which it's easy to construct the corresponding URIs, e.g., http://papyri.info/biblio/7513.

But Zotero presented a problem. URIs for bibliographic records in Zotero server use alphanumeric "item keys" like this: CJ3WSG3S (as in https://www.zotero.org/groups/papyrology/items/itemKey/CJ3WSG3S/).

That item key string is not, to my knowledge, included in any of the export formats produced by the Zotero desktop client, nor is it surfaced in its interface (argh). It appears possible to hunt them down programmatically via the Zotero Read API, though I haven't tried it for reasons that will be explained shortly. It is certainly possible to hunt for them manually via the web interface, but I'm not going to try that for more than about 3 records.

How I got the Zotero item keys

So, I have two choices at this point: write some code to automate hunting the item keys via the Zotero Read API or crack open the Zotero SQLLite database on my local client and see if the item keys are lurking in there too. Since I'm on a newish laptop on which I hadn't yet installed XCode, which seems to be a prerequisite to installing support for a Python virtual environment, which is the preferred way to get pip, which is the preferred install prerequisite for pyzotero, which is the python wrapper for the Zotero API, I had to make some choices about which yaks to shave.

I decided to start the (notoriously slow) XCode download yak and then have a go at the SQLLite yak while that was going on.

I grabbed the trial version of RazorSQL (which looked like a good shortcut after a few minutes of Googling), made a copy of my Zotero database, and started poking around. I thought about looking for detailed documentation (starting here I guess), but direct inspection started yielding results so I just kept going commando-style. It became clear at once that I wasn't going to find a single table containing my bibliographic entries. The Zotero client database is all normalized and modularized and stuff. So I viewed table columns and table contents as necessary and started building a SQL query to get at what I wanted. Here's what ultimately worked:


The SELECT statement gets me two values for each match dredged up by the rest of the query: a value stored in the itemDataValues table and a key stored in the items table. The various JOINs are used to get us close to the specific value (i.e., a short title) that we want. 116 in the fieldID field of the fields table corresponds to the short title field you see in your Zotero client. I found that out by inspecting the fields table; I could have used more JOINs to be able to use the string "shortTitle" in my WHERE clause, but that would have just taken more time.

The results of that query against my database looked like this:


So, copy that tabular result out of the RazorSQL GUI, paste it into a new LibreOffice spreadsheet and save it and I've got an XML file that I can dip into from the XSLT I had already started on to produce my HTML view.

Oh, and for those paying attention to such things, XCode finished downloading about two-thirds of the way through this process ...
Latest in the Playing with PELAGIOS series.

I've just modified the tooling and re-run the Pleiades-oriented-view-of-the-GAWD report to include the RDF triples just published by Open Context and to exploit, when available, rdfs:label on the annotation target in order to produce more human-readable links in the HTML output. This required the addition of an OPTIONAL clause to the SPARQL query, as well as modifications to the results-processing XSLT. The new versions are indicated/linked on the report page.

You can see the results of these changes, for example, in the Antiochia/Theoupolis page.
The is the lastest in an on-going series chronicling my dalliances with data published by the PELAGIOS project partners.

I think it's safe to say that, thanks to the PELAGIOS partner institutions, that we do have a Graph of Ancient World Data (GAWD) on the web. It's still in early stages, and one has to do some downloading, unzipping, and so forth to engage with it at the moment, but indeed the long-awaited day has dawned.

Next Steps and Desiderata

For various technical reasons, I'm not yet touching the data of a couple of PELAGIOS partners (CLAROS and SPQR), but the will hopefully be resolved soon. I still need to dig into figuring out what Open Context is doing on this front. Other key resources -- especially those emanating from ISAW -- are not yet ready to produce RDF (but we're working on it).

There are a few things I'd like the PELAGIOS partners to consider/discuss adding to their data:

Some of the PELAGIOS partners distribute their annotation RDF in a relatively small number of files. Others (like SPQR and ANS) have a very large number of files. This makes the technique I used earlier for adding triples to the database ungainly. Fortunately, 4store provides some command line methods for loading triples.

First, stop the 4store http server (why?):
Try to import all the RDF files.  Rats!
Bash to the rescue (but note that doing one file at a time has a cost on the 4store side):
This took a while. There are 86,200 files in the ANS annotation batch.

Note the use of the -a option on 4s-import to ensure the triples are added to the current contents of the database, rather than replacing them! Note also the -v option, which is what gives you the report (otherwise, it's silent and that makes my ctrl-c finger twitchy).

Now, back to the SPARQL mines.

Querying Pleiades annotations out of Arachne RDF was as simple as loading the Arachne Objects by Places RDF file into 4store the same way I did nomisma and running the same SPARQL query.  Cost: 5 minutes. Now I know about 29 objects in the Arachne database that they think are related to Akragas/Agrigentum. For example: