There's spatial data you want in an "ESRI Personal Geodatabase" file, but you don't have any ESRI tools. How do you get it out?

One short answer
One how-to (steps verified on Windows Vista)

A sequel, wherein we write a python script to automate the extraction of multiple feature classes (layers, themes) with different geometries from a single geodatabase file to multiple shapefiles. 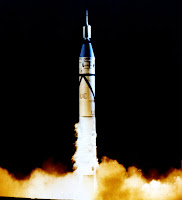 It was a real pleasure to read John Noble Wilford's piece in Tuesday's NYT ("Remembering When U.S. Finally (and Really) Joined the Space Race") on the significance and impact of the Explorer launch. His recap of the events and efforts leading up to the jubilant press-conference picture -- the one in which von Braun, Pickering and Van Allen triumphantly hold up a model of the satellite, and which for some reason the Times didn't run a copy of online -- caught me emotionally off guard.

Like so many of my peers, I've harbored, since childhood, a soft spot for the romance of space exploration. Part of its enduring infectiousness, I suppose, is its seamless blend of ethereal outlandishness and gritty mundanity. This is a heady brew, distilled from reality, promulgated by von Braun and others, and still shaping U.S. space policy (see Alex Roland's quasi-review of Michael Neufeld's Von Braun: Dreamer of Space, Engineer of War, Knopf, 2007; ISBN: 9780307262929). From time to time, working on projects we cared about, we've all felt something like what Wilford's subjects (the Redstone/Explorer teams) were feeling in the run-up to that launch: all that hard work and those late nights as the team pulled together (and threatened to fly apart) under the pressure of the deadlines and the ambitions and the sheer challenge of what you were trying to do.

These are just two examples of some great space reporting in the Times this past year, both presentist and retrospective. There was also Wilford's treatment of the Sputnik anniversary (25 September 2007) and Christine Woodside's first-siting story (21 October 2007). And, also in the big space issue on 25 September, there was Dennis Overbye's poignant essay "One Giant Leap, Followed by Baby Steps," which did feature another amazing photograph:

There, on a pillar of violence, is your dream of transcendence, of freedom, of escape from killer rocks in the sky, boiling oceans or whatever postmodern plague science comes up with. Of galactic immortality.


There's been alot of retrospective, and hooplah, here in Huntsville during the run-up to this, the 50th anniversary of the U.S. entry into space. People who've lived or visited here know just how closely bound to space and rocketry our sense of place and community identity are. This got a bit easier to explain to outsiders when Shaila Dawan's "When the Germans, and Rockets, Came to Town" ran in the NYT on 31 December 2007. Although I must point out ... peanuts have never been a big crop around here. For 1950, try cotton.

Locally, the Huntsville Times has been reprinting historic, space-related front pages on a daily basis. There's also been some interesting original reporting, like:
The 50th Anniversary website provides plenty more of this sort of thing (remembrances, audio, video, images), and also includes information about the America in Space Technical Symposium going on today and the gala celebration tonight (purportedly to be streamed live at al.com).

I think I'll put on my propeller beanie and head down to Pete's. Maybe he's brewing Rocket City Blend today ...

I've been wondering for a long time -- admittedly without yet having personally done anything about it -- why so few conference papers and lectures in ancient studies seem to get live-streamed or retrospectively web-cast.

Well, hats off to Kostis Kourelis, Lita Tzortzopoulou-Gregory and their panelists in Chicago! They've posted podcasts (with print abstracts) of their entire panel from the 2008 AIA Meetings on "The Archaeology of Xenitia: Greek Immigration and Material Culture." Now those who couldn't afford to go to the meetings, or had good personal reasons not to, can experience these papers. Moreover, the papers themselves now have a citeable, scholarly avatar.

Attention 2009 AIA and APA panel organizers: let's see how many panels we can podcast. Since I'm co-organizing the ASGLE panel, I'll have to put up or shut up myself.

My only criticism of the Xenitia podcasts: no license. What can I do or not do with these papers and their content? For next year, we'll want to work such details out in advance with our presenters.

Thanks to Bill Caraher for the tip by way of AWBG.

The word is on the street: Chuck Jones will start work as the head librarian at ISAW in March. We're batting around various initiatives already, so if there's something you think that ISAW should be doing (at the intersection of digital scholarship, libraries and ancient studies),
let us hear about it.

Just when I started focusing serious mental concentration on the issue of long-term archival arrangements for Pleiades data output, the UK cut funding for the Arts and Humanities Data Service. Now, one of the online resources that has been most influential on my thinking about how to do online resources for ancient studies is under funding threat: the Portable Antiquities Scheme. And just when we were gearing up for some serious interoperation. I'll let Alun Salt give you all the details.

I'm going to go put on my Grumpy shirt and cross my fingers ...

Yes, I know I'm an American and our project is spearheaded by American institutions. But we all study antiquity. And we all collaborate.

I've known about Alexandra Trachsel's project on Demetrios of Skepsis for some time (we hope Pleiades will provide the raw data for maps she'll need), but it was only today that I stumbled across (by way of a link report for Pleiades from Google's Webmaster Tools) her interesting blog. One finds more there than meta for her project, especially interesting thoughts and reactions to new trends and reports in digital publishing and digital humanities research.

I keep running into more and more examples of people or projects building interesting and useful datasets/gazetteers for the ancient world. Maybe we should be talking to each other in a more regular and organized fashion?

There are, of course, the big digital gazetteers (compiled from multiple sources) that incorporate some ancient sites (e.g., the open-access Alexandria Digital Library Gazetteer and GeoNames and the proprietary Getty Thesaurus of Geographic Names). But there are also established academic/historical projects like the China Historical GIS (unfortunately locked away from the geoweb by its license). Some other academic projects focus on the capture of metadata (including spatial information) about archaeological surveys, digs, bibliography and more (for example, Fasti Online, the Mediterranean Archaeological GIS, the Portable Antiquities Scheme, the TAY Project: Archaeological Settlements of Turkey, and some of the vast array of projects cataloged by the Electronic Cultural Atlas Initiative over the last decade).

Then there are the folks building teaching and reference datasets (e.g., Ross Scaife's Bronze Age Crete KML for Google Earth), as well as those developing regional gazetteers for academic purposes (I just noticed Bill Caraher's mention of his plans to co-author with David Pettegrew a gazeteer of the Eastern Corinthia -- hint: search in page for "gazetteer").

If I were going to try to gather some information about projects creating academic historical "gazetteers" or "geographic datasets" (focused on "ancient" times), what questions should I be asking? Should your project be listed?

It's a package of python code for manipulating and analyzing two-dimensional geospatial geometries. Shapely lets you calculate unions, intersections and differences of two-dimensional shapes, thereby letting you determine whether these shapes intersect, touch or contain one another.

Sean had alot of great help (see Shapely Credits). Some of Sean's work on Shapely was supported by our NEH grant for Pleiades.

Why would humanists care about (or help fund) such a code library?

I'll give you the Pleiad-o-centric part of the answer: information discovery is an essential component of humanities research, and geography is often highly relevant. What's near what? What's within something else? Or within a certain distance of something else? Are there Roman-era weapon finds cataloged by the Portable Antiquities Scheme that fall within 2km of a Roman-era fort registered by Pleiades? Are there excavations documented by Fasti Online or regional surveys cataloged by MAGIS that correlate with features cataloged in Pleiades? (If so, dynamically provide Pleiades users with links to them as they browse).

Shapely gives us what we didn't have: a tested, free, open-source, pythonic base for building these kinds of correlation functions and cross-project interoperability calculations into Pleiades and, hopefully, helping others do the same.

Thanks to Chuck's post on ANE-2, I just learned that the AHA has awarded the 2007 James Henry Breasted Prize to:

Rob Frieden wants us to "blame blogspot" for his email not getting to his wife (her company's spam filtering solution deems any message containing any blogspot url to be spam and bounces it).

I've been having similar problems sending legitimate professional email to colleagues at various universities (these emails contained citations of various entries on this here blog; bounces included Harvard and the University of California Santa Barbara among others). Some of them at least employ a bounce message that explains why:

Spamhaus is the culprit.

Newsflash for Spamhaus and filter writers everywhere:
Maybe I should bill Spamhaus (or those institutions using its black list) for the time I've spent troubleshooting this. Maybe you should too.

Update: this has been going on for a while:
And, most interesting of all, the comment stream on Storm Hits Blogger Network (slashdot, 30 August 2007) ... search in page for "spamhaus" ... where we find arguments to the effect that my reaction above fails to capture the full complexities of the situation.